Philip Yaff (October 2011) held that this notion was simply a myth, and that what you say is less important than how you say it and felt that the above was nothing more than a gross misinterpretation of a scientific experiment.

What I will suggest is that communication – in my experience in the therapy room and my own life – is usually based on the shared emotional history you have with the person you are talking to and also previous intimate relationships and the impact they had on you. This is the focus of my blog.  Whatever the communication you use – be it verbal, non-verbal, this is less important than the underlying feelings from where you are actually communicating from.  Take a look at the graphic below. 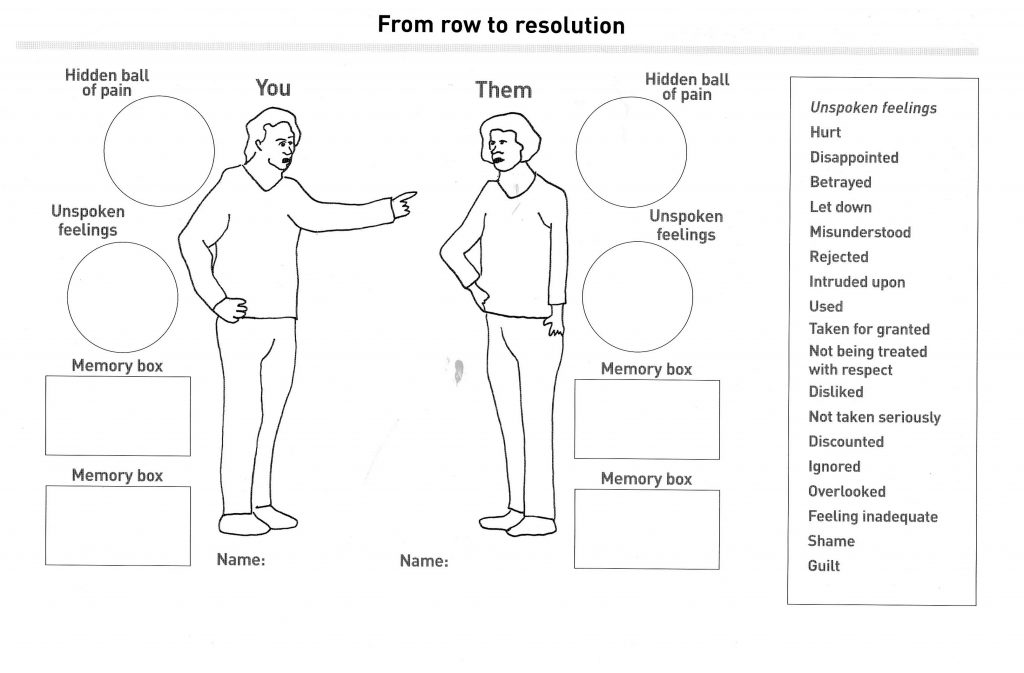 Taken from “Drawing on Your Relationships”, M Sunderland & N Armstrong, 2008

Let’s look at the example of Sasha & Tobias, Rebecca & Naomi .  Please note examples and names used are entirely fictitious and are drawn upon various examples of people I know or have worked with as an amalgamation rather than specifics and any resemblance to people is entirely coincidental and unintentional.

Rebecca, a first-born daughter is 24 years old.  She has a daughter, Naomi.  She has always felt criticised or put down by her mother and never feels quite “good enough” when it comes to her mother’s thoughts, feelings and expectations of her, but has absorbed this knowledge into her psyche and unconsciously acts out this script each time her mother speaks to her on matters concerning her daughter.

Her mother herself often felt put down by her own mother and when trying to conceive at the outset found it very difficult and experienced many setbacks getting pregnant.  This caused strain on her marriage but eventually Rebecca was born, a much wanted daughter.  This followed the birth of a second daughter, three years later, also much wanted and adored.

Note that many of these aspects may be unconscious feelings, just below the surface and are the main drivers behind communication patterns and ALSO, importantly how the central characters played out these roles as their lives progressed.

Rebecca would constantly push the boundaries with her mother; she wanted to find out own way, to make the mistakes she needed to make and grow up at her own pace, sometimes “too quickly” from her mother’s perspective.

The marriage eventually cracked under the strain and Sasha found herself on her own with two daughters and an ex husband with whom she battled to receive basic maintenance.

Rebecca started sleeping around with boys (looking for love or wanting to be loved for herself, perhaps?) and had a baby at 19 years old.

The younger daughter miraculously seems relatively fine now that the dust has settle a bit and by comparison to Rebecca sets herself out as “the good daughter” which often causes more communication tensions.

The mother now feels completely helpless as there is little she can do for her daughter but has begun now to open up to a therapist about her feelings as she has started seeing a new man and really wants now to make things work.

Things have now settled with her daughters but Sasha looks after her 5 year old granddaughter on three days out of four after school to enable her daughter to work to support her little family.  Fortunately her daughter managed to set up home with the father of their daughter and whilst at times things can be a bit stretched financially they are keen to make things work.  There is the occasional flare up.

The communication here centres on the relationship between Sasha and Rebecca.  Rebecca comes to pick her daughter Naomi up on a Tuesday evening.  Sasha says to Rebecca “Naomi was very unsettled today, how’s things going?”

Rebecca (going on the defense) “everything’s fine” (knowing deep down it isn’t because for some reason her salary hasn’t been paid in and she’s gone £250 into her overdraft at the bank with various bills still to pay; and she knows that she’s run up her credit card bill to pay for items for Naomi that she knows full well she can’t fund.  She’s tense and knows that there may be a “lecture on money” at some point so she’s girding herself for the potential challenge…)

Rebecca: “I’m struggling a bit just now as my money’s not been paid and I have a ton of bills”.

Sasha: “what do you mean, struggling?

Rebecca: (sensing an argument) “It’s nothing mum, just back off, I’ll sort this out” (deep down she wants help but is definitely not going to ask her mum).

Sasha: “Let’s not go down this route again, Rebecca; it seems to me that you’re always struggling with money.  You really need to get yourself sorted”.

Rebecca: (hey, I knew this, lecture time).  “Forget it mum! Get off my case! I told you, it’s just difficult right now and I don’t need your lecturing”!

Rebecca storms off with Naomi, slamming the door.

Sasha’s partner Tobias comes in at that very moment, witnessing the slamming of the door as he was about to come in.

“Not another argument with Rebecca, Sasha?”

Sasha is fuming herself, not sure whether to rant or cry.  This pattern of arguing has been going on for so long, and she knows Tobias is starting to show signs of it affecting him and threatening their relationship.

“We really can’t go on like this, Sasha.  I hate seeing you unhappy and I feel there’s little I can do to help and we’ve talked about this so many times.  You rescue Rebecca every time, you look after her five year old daughter and I’m starting to feel like a spare part”.

Later in bed that night, Sasha reflects on the day and how it has gone.  She knows there’s stuff deep down but her head is in such a whirlwind she really doesn’t know which way is up.  After her marriage breakdown the last thing she wants is another breakup and yet she’s a mum with responsibilities.  Something has to change.

And this is where talking therapies can help.  By each and every one of us knowing and owning our deep rooted fears and feelings, relationships can become more conscious and alive.  By stating our feelings in the given moment at least to ourselves.

In this situation Rebecca needs to feel safe to talk to her mother about her spiralling debt and get the professional help she needs to budget and plan accordingly, perhaps finding other ways to earn money rather than spending it to alleviate her own feelings of inadequacy.  What Rebecca does know is what’s happening just now – yet she is an adult now and has to take responsibility for herself.

Sasha needs to understand that how Tobias feels is about himself – it doesn’t mean she needs to be heartless, but release the fear surrounding their relationship.  If it is strong enough it will work but only if both are able to be honest about their feelings; her own feelings of inadequacy and guilt over the breakup of her marriage and difficult start with her daughters and his ability to step up to say exactly how he feels about Sasha.

Tobias needs to be honest about what he is truly feeling.  Separate from the family?  Overlooked?  Unable to be of “service” to his partner?  He may want to “solve” a problem – if he feels unable to make her happy and then removing himself from the situation may make her happier in his eyes.  He may not feel part of the family in the same sense that whilst he may love her daughters, biologically they belong to another man.  Obviously we live in a civilised society but if you look to the animal kingdom, when lioness and her cubs are abandoned by the original mate and a new mate comes onto the scene, he will kill the cubs so that he can father his own cubs.

What outcome do you think these characters are all seeking?

Who comes for therapy in these circumstances?  Often the mother will come as she realises enough is enough after many years.  Sometimes she may want to bring her partner or the offspring to “solve” the ongoing issues.

But ultimately everyone needs to learn a new way to talk to each other; just one person coming can help effect the change.

What needs to happen?

Sometimes we need to rediscover the positive elements of our lives and relationships.  Simply making time to have a get together where the focus is on having fun and enjoying the relationships in the given moment.  Bringing things up at a time when people are relaxed may work better but always coming from the point of view thus:

And always be careful to stick to the topic.  Allow each other the time and space to talk without interruption.  Be mindful of ”rescuing” to make yourself feel better.

And remember too… you can please some people some of the time, you can’t please everyone 100 percent of the time.

What others think of you is none of your business.