Brain Working Recursive Therapy (BWRT®) is a relatively new and innovative therapy devised by Terence Watts (author of many best selling books, including Warriors, Settlers & Nomads, Relationships Repair, Banish Your Anxiety and many more). It is solution focused and is immensely successful in treating a range of issues, especially ones where you find yourself “automatically” responding in ways which are not effective in your life.  It can help eradicate difficult feelings in just ONE session and can be completely content free!

Below you will find information taken directly from the BWRT site to explain more about the therapy:

In fact, by the time the limbic system is involved, the physical body has already started to react, already commenced whatever action or psychological process that past experience has indicated is needed… even if that experience is out of date and no longer relevant. It’s a kind of ‘blind obedience’.

The name of that part of the brain depends on whether you are following the biological model or the evolutionary model – the latter is used in the Level 1 training since it makes it much easier to understand the how and why of what we do. The differences are:

It’s the oldest brain structure we have and it dates back some 650 million years or so to the first sentient creatures that walked the planet, our earliest ancestors. Anatomically, it’s the ‘brain stem’ and includes the primitive part of the limbic system.

No matter how it’s referred to in any one model, the important thing is that it was the only brain those early ancestors had… it had to do everything. Every impulse from the world and from the physical body was processed by that early brain before it progressed anywhere else. And here’s the thing: nothing’s changed, because once evolution has created a fundamental process it’s there for good. So although our brain is greatly evolved from those earliest ancestors of ours, every bit of information is still processed by that reptilian complex before it goes anywhere else.

The important thing about all this is that when a pattern of impulses is recognised, it will start the body responding in the same way as it has before, since that response led to survival and must therefore be safe… but we’re not aware of this at that point. In fact, we don’t become aware of it until that impulse has covered up to fifty meters of neural network into the part of the brain where awareness resides. By then, everything is in full flight!

BWRT® does its work in that ‘cognitive gap’ between an action starting and conscious recognition of that action. We actually work directly with that reptilian complex, to change the response to patterns of input and we do this by using the same automatic processes by which it learns the patterns it responds to in the first place – but we get it to wait for further information instead of responding immediately. All we have to do then is ensure that the new information is instantaneously preferable and therefore instantaneously accepted.

Currently (as at January 2018), there’s not another therapy model in the world that works via this very early part of the brain and that’s what sets BWRT® apart from any other style of therapy – well, that and the sheer speed at which it does its work, of course! 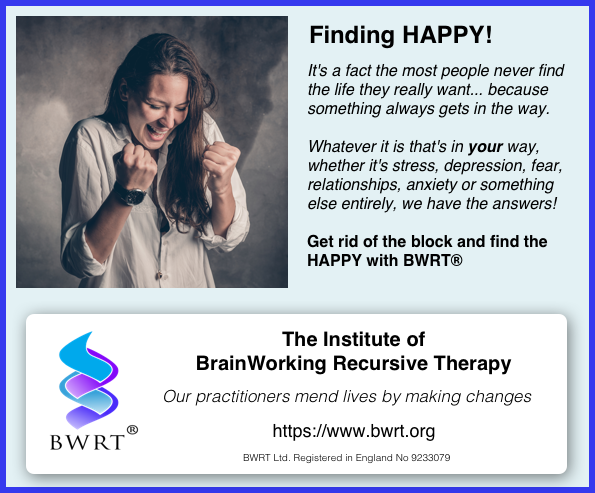